One of the most important reasons is that the Qur’an is a source of guidance and wisdom, and it can help you to better understand yourself and the world around you. Due to its immense importance, Quran Host proffers to learning Quran online.

Ayat al-Kursi, also known as the Throne Verse, is a verse from the Quran’s second chapter (Surah), Surah Al-Baqarah. The verse, the 255th verse of the chapter, is considered one of the most powerful verses in the Quran and is often recited by Muslims as a form of protection and a means of seeking divine help.

Translation and Brief Description of Ayat-ul-Kursi 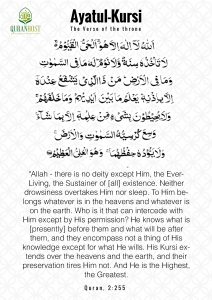 “Allah – there is no deity except Him, the Ever-Living, the Sustainer of [all] existence. Neither drowsiness overtakes Him nor sleep. To Him belongs whatever is in the heavens and whatever is on the earth. Who is it that can intercede with Him except by His permission? He knows what is [presently] before them and what will be after them, and they encompass not a thing of His knowledge except for what He wills. His Kursi extends over the heavens and the earth, and their preservation tires Him not. And He is the Highest, the Greatest.”

The verse begins with the declaration of the oneness of God and His eternal existence, as well as His ability to sustain all of creation. It also states that nothing can happen without God’s permission and that God knows all that has occurred and will occur. Furthermore, this ayah emphasizes Allah’s grandeur and power, stating that His “Kursi” (throne) encompasses the entire universe and that the preservation of it does not tire Him.

The Throne Verse is in the Arabic language. therefore it is necessary to learn Quran with Tajweed online to have the best and proper recitation of every single verse of the Quran.

Ayat-ul-Kursi Importance in the light of Hadith

Ayat al-Kursi is widely considered one of the Quran’s most powerful verses and is often recited by Muslims. It is also called “The Sardar of Ayas.” One of the great Hades that spotlight the Ayat-ul-Kursi is mentioned below.

According to Abu Huraira, the Prophet of Allah ( ) once said, “everything has a hump (zenith), and the hump (zenith) of the Qur’an is Surat Al-Baqarah, which contains the Ayah known as Ayat Al-Kursi, which is the master of all the Ayat in the Qur’an.”

Similarly, the following Hadith also influence the greatness of Ayah as follows.

“The Prophet of Allah, peace and blessings be upon him, is claimed to have said: “Whoever recites the verse of the Throne’ (ayat-ul-kursi) after every prescribed prayer, there will be nothing between him and his admittance into Paradise but death.”

Hence it is clear in the light of the above Hadith that Ayat-ul-Kursi is very important for every Muslim to learn and recite daily. Quran Host teaches this Ayah with special care during the free online Quran classes.

The Ayat-ul-Kursi, the chief of the verse of the Holy Quran, has many advantages for all Muslims.

From the benefits mentioned above, we must learn and recite this ayah daily.

Sanctuary against the Shaitan

Muslims believe that reciting the verse can provide protection from evil and negative influences and bring blessings and good fortune. It is considered to be one of the best shields against the Shaitan. This is also mentioned in the number of Hadith.
According to Abu Huraira, the Prophet of Allah said that whoever repeats Ayat Al-Kursi and Ha Mim Al-Mu’min when he arrives (wakes up) in the morning will be safeguarded by them till the evening. And whoever recites them when it darkens out will be shielded from harm until daybreak.

Says Abu Huraira: “I am in charge of the Ramadan Zakat thanks to Allah’s Messenger (p.b.u.h) (i.e. Zakat-ul-Fitr). Someone approached me and began scooping some of the (Zakat) meal with both hands. He was captured, and I promised to send him to Allah’s Messenger (p.b.u.h).” After completing his story, Abu Huraira said, “He (the thief) said, “Whenever you go to your bed, recite the Verse of “Al-Kursi” (2.255) for then a guardian from Allah will be guarding you, and Satan will not approach you till daylight.” The Prophet ( ) responded, “He told you the truth, though he is a liar, and he (the thief) was Satan himself,” about this.

Therefore, this ayah is the ultimate protection from all the footsteps of Shaitan. We should avoid all evil and wrongdoings and advise others under Islamic teaching. Our kids should also be protected from the Shaitan, and Ayat-ul-Kursi is a main tool to protect our children. Keeping this in mind, the QuranHost also has a separate session for memorizing this ayah in its Online Quran classes for kids.

Ayat-ul-Kursi is a powerful verse that describes the power of God and His ability to protect, sustain and guide us through all aspects of our life. Memorizing and reciting this verse regularly can provide strength, peace of mind, and protection from negative energies. Quran Host highly recommends learning this as it is a part of the Quran, and we offer it in our Online Quran reading to seek guidance and patience.

However, Living with Quran is life-changing!